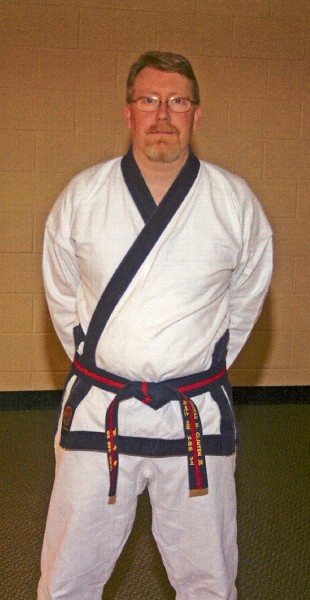 Tom started his training in 1980 in the martial art of Tang Soo Do at the age of 10.  Initially, he started karate to learn to defend himself.  After the first year, he realized the martial arts were more than just defending himself.

The first days were kind of scary but after a couple of weeks, he seemed to like it.  It was very tough mentally and physically. The hung in there and moved up the ranks.  By 1983, Tom had achieved the rank of 3rd gup red belt.  After 1985,  Tom went to college, and then started his career, but did not study the martial arts.  After a long layoff, Tom started training again in 1991.  when he returned he had one goal in mind and that was to train hard to get his 1st dgree Black Belt.

Tom loves teaching and working out, but his real enjoyment comes from seeing the students achieve their goals in Tang Soo Do.